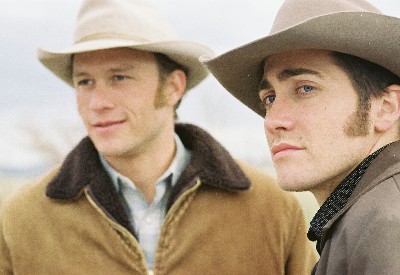 Ang Lee's new film Brokeback Mountain just screened before a very respectful audience of film critics here in Melbourne, of whom I was one. I am delighted to report that the film was magnificent. Understated, subtle, rich in emotion, beautifully shot and superbly acted. It made me cry a couple of times.

All the buzz about Ledger's performance as Ennis Del Mar is spot-on: he really does give a remarkable portrayal of a man who is so emotionally crippled, and frightened of himself and what his feelings mean, that he is unable to express the love he feels for Jack Twist (Jake Gyllenhaal).

The expanded roles for the protagonists' wives (compared to their minor roles in Annie E Proulx's original short story) are well handled, so we feel compassion for them both, and gain a real sense of insight into their family lives.

The sex scene in the tent between Jack and Ennis should satisfy everyone, homophiles and homophobes alike; although to my mind the second tent scene (I'll avoid saying too much to avoid spoilers) is far more emotionally charged and expressive.

Yes, in case you were wondering, there's nudity at various points in the film; none of it blatant and all within context. Yes, Jack and Ennis kiss without the camera cutting away. This is no Philadelphia and does not shy away from the physical reality of a 20 year relationship between two men.

Now I want to see the film again, because I disengaged my critical functions at the start so that I could simply sit back and enjoy it.

It's a masterpiece, but a subtle one: go in with your expectations set too high and you might be disappointed. Now, if I can only get to interview Heath, Jake or Ang, my year will be complete!

This was a quick post I just placed on the IMDB - full review coming soon.
Posted by richardwatts at 1:20 pm

Definitely a movie with a plot easy for the late night hosts to make fun of..Letterman has had several go's so far. Recently on this show, Nathan Lane sung a 'Brokeback Mountain' medley with dancing cowboys in sparkly shirts. Do you find this offensive or laugh with 'em?

To be honest I don't give a shit about Letterman; don't watch him, don't consider him particularly relevent to an Australian audience. As for the plot being an easy target - well, yeah, it's about two men who are in love with each other - given that the mainstream considers this a radical concept, naturally it's gonna be a target. As for Nathan Lane, I prefer to laugh at him, rather than with him. ;-)